Whether you're starting out in crochet or have been crocheting for many years, chances are that you've been confused at some point by the differences between UK and US terms used in patterns, blogs and tutorials. Let's talk through the differences between English speaking nations! This guide should give a good overview of both sets of terms to have you crocheting with confidence.

Why don't we all use the same crochet language?

The reasons are lost in the mists of time but probably arose when migration occurred from the UK and Ireland to the US in the 1800s. Back then, patterns and skills were passed on by word of mouth and it's easy to see how things could have changed.

Crochet stitches - the differences between UK and US terms

If you look at the names of the stitches in UK versus US terms, you can see some similarities but also the important differences.

It's easy to see why the two sets of terms cause serious confusion or errors whilst crafting when you're just starting out in crochet and learning how to read your patterns. If you work a UK pattern but think it's in US terms, the item you make will turn out twice the size! If done the other way, it will be far too small. The pattern will usually specify whether to use US or UK terms so hopefully you won't make this mistake.

As well as calling crochet stitches by different names, we tend to also refer to yarn, its properties and characteristics in a completely different way too.

Typically in the UK, a wound bundle of yarn is a hank, although the term skein is now being used more interchangeably to describe this form. For yarn like this, you will need to hand wind it using a yarn winder to create a 'cake' of yarn.

A familiar site to UK crocheters is an oval ball of yarn, which is less elongated than a skein and usually used from the outside.

The UK trend is towards calling everything a ball of yarn, unless it's an unwound hank, in which case it's usually called a skein.

Read About All Yarn Ball Types

The US uses Imperial measurements so US patterns usually give the amount of yarn required in yards. In the UK, and most other countries around the world, metres are the standard. Today, most yarn packaging shows how many yards and metres are included, and patterns often list the number of metres required as well as the yardage.

The trouble that is a common source of confusion is still which is bigger - a yard or a metre. This can be crucial when working out if you have enough yarn to complete a pattern.

Yarn is sold throughout Europe and in many other countries around the world using kilograms and grams as the unit of measurement. The most common units of yarn sold are 25g, 50g, 100g and 400g.

The term yarn weight can also be used to describe the thickness of yarn. This makes sense when you think about it as the same length of a thicker yarn will always weigh more than the same length of a thinner yarn. But to add to the head scratching, Australia/New Zealand terminology is different to the US or UK. The Craft Yarn Council in the US has tried to introduce standard terms for the yarn weights using numbers. 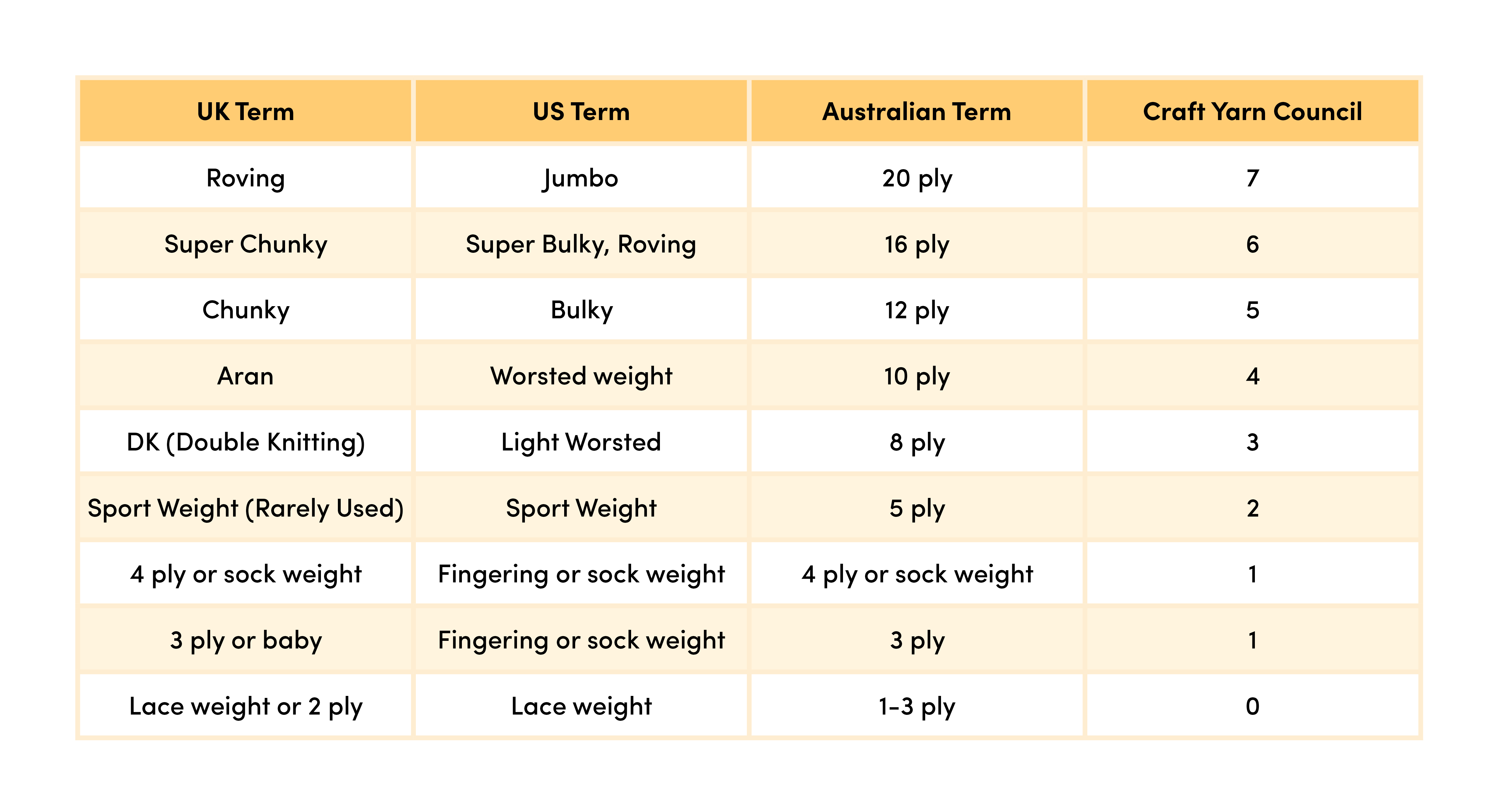 The terms used to describe crochet hook sizes are the most confusing of all when you look at the differences countries use. As well as UK/European metric and US sizes, there are also Australian sizes and Canadian sizes. This last category is also called Imperial sizing and is what UK crocheters used before the change to metric measurements in the 1970s.

Check Out Our Crochet Conversion Charts

Gauge and tension, skip and miss

Crochet and knitting patterns often tell you how many stitches and rows you should have in a specific measurement - usually 10cm (4 inches).

In US terms, this is known as a gauge but if you use UK terms it's tension. Gauge and tension are commonly understood, particularly now that the internet has brought UK and US crochet patterns to an international audience.

So, what do we have in common?

The most important things - a love of yarn, crochet, knitting and making! The differences are really just words that we might need to loop up from time to time. We hope our handy crochet terms conversion charts will help you out!